We have by far the greatest expertise in ultra precision and are world market leaders. For almost 40 years we have been manufacturing ultra-precision mechanical and optical components with form and position tolerances in the micrometer and nanometer range. We then clean, assemble, check and pack in the most modern clean rooms. At the same time, we maintain extremely high quality standards for ourselves at all times and we drive this forward with a lived “control plan”. 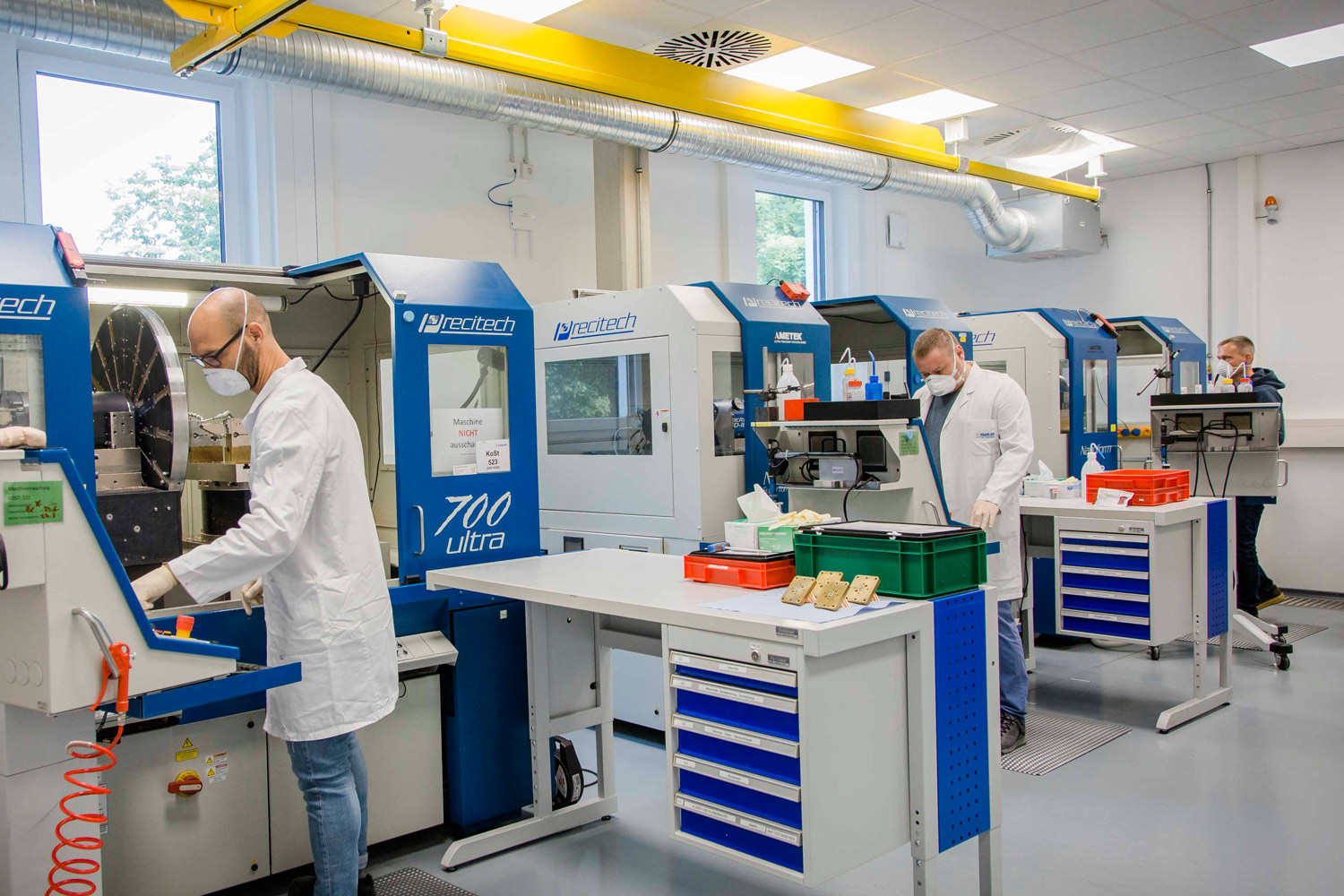 We are a powerful medium-sized company with around 110 employees. Many of them have been with our company for a long time. Our advantage is our broad range of expertise. We have physicists, chemists, material engineers, CAD / CAM experts, milling cutters, lathe operators and fitters working for us. 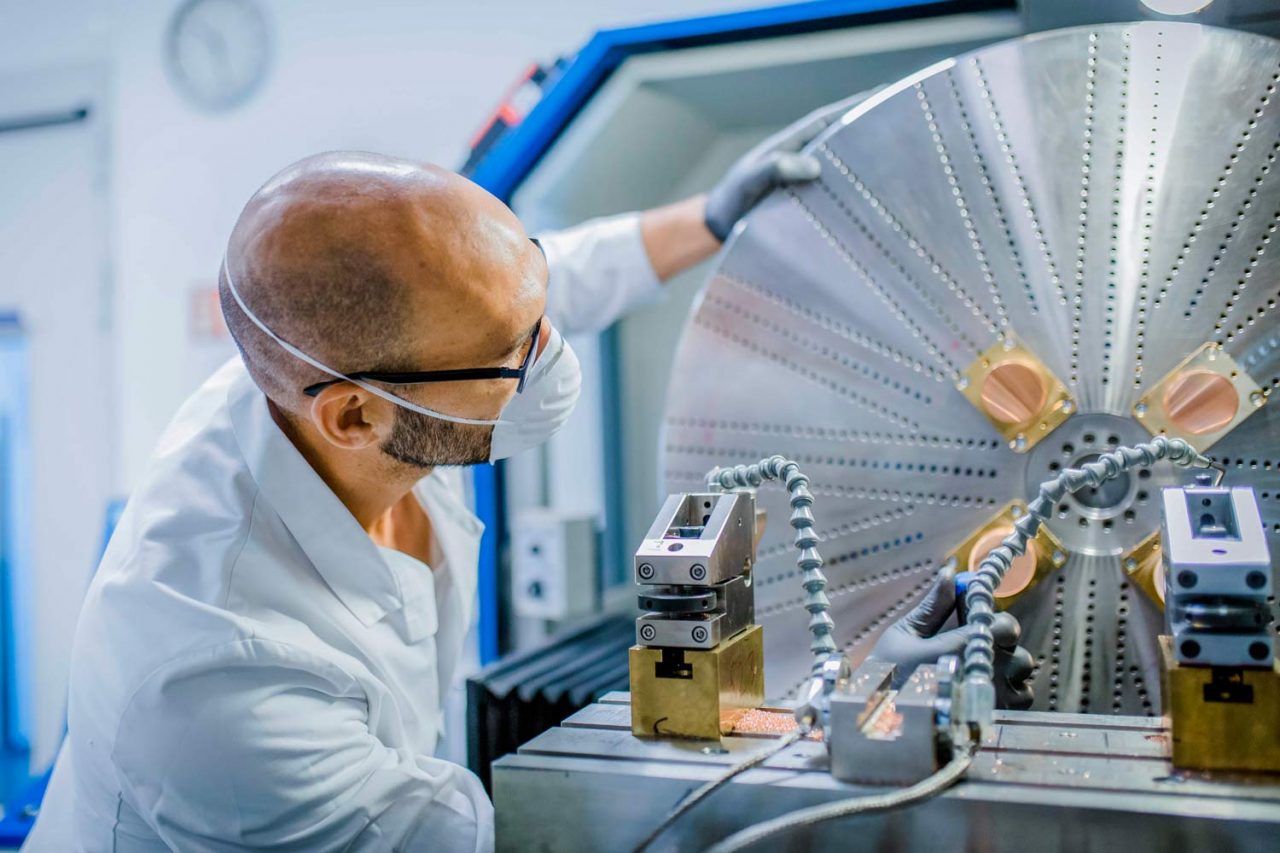 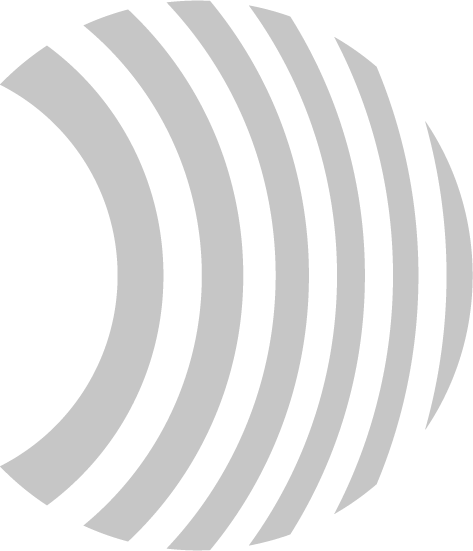 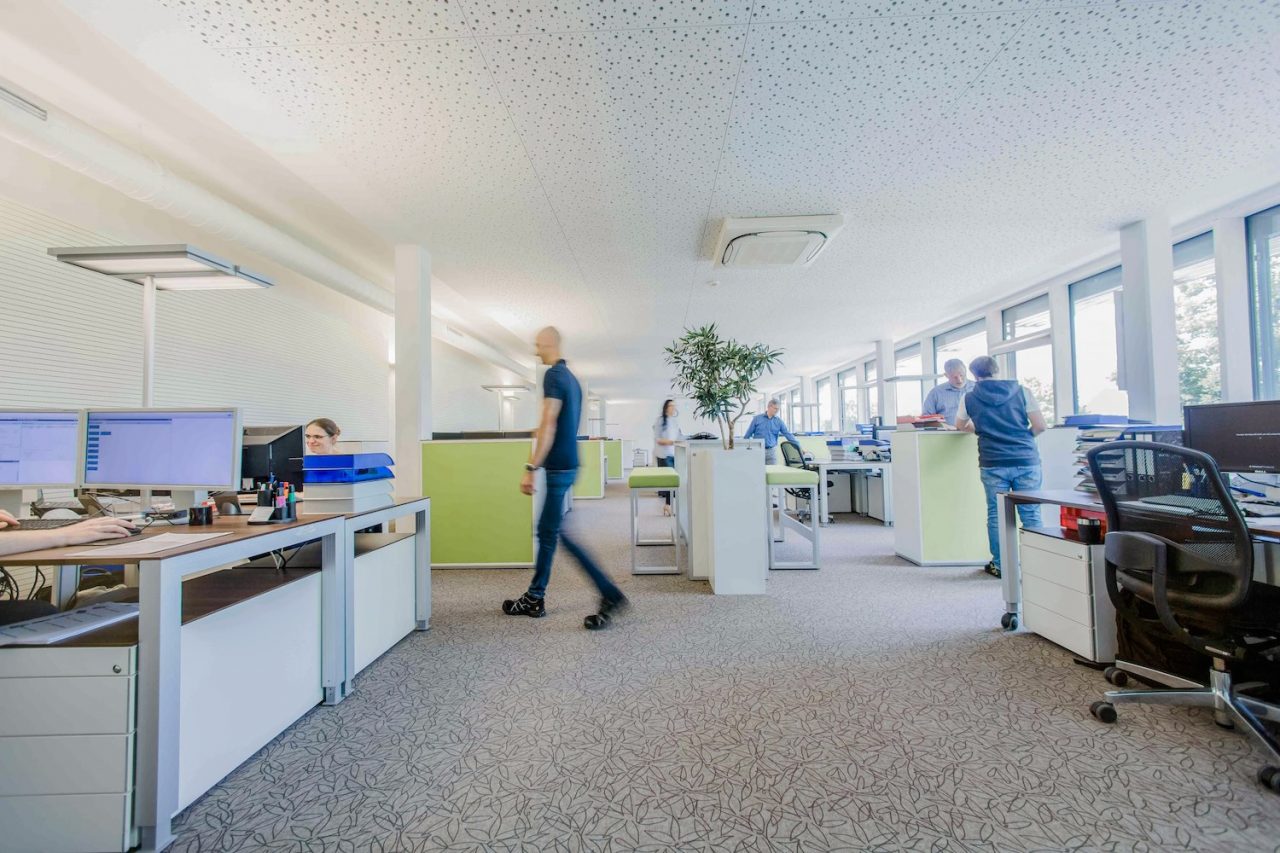 The company began with the manufacture of air-bearing, ultra-precision guides and rotary tables. The idea quickly developed to use it to build ultra-precision machines. Not only the sale of machines and components established itself, but also in-house contract manufacturing, which today is the main core business.
History & Innovations

Markets and the future

The demand for ultra-precision mechanical components, optics and assemblies is increasing due to the steadily increasing demands on efficiency, yield and reliability of all products on the market.
This applies in particular to the areas of Semiconductor, Industrial Scanning, Laser Welding and Cutting, Industrial Monitoring and Space.

Markets and the future

The demand for ultra-precision mechanical components, optics and assemblies is increasing due to the steadily increasing demands on efficiency, yield and reliability of all products on the market. This applies in particular to the areas of Semiconductor, Industrial Scanning, Laser Welding and Cutting, Industrial Monitoring and Space. 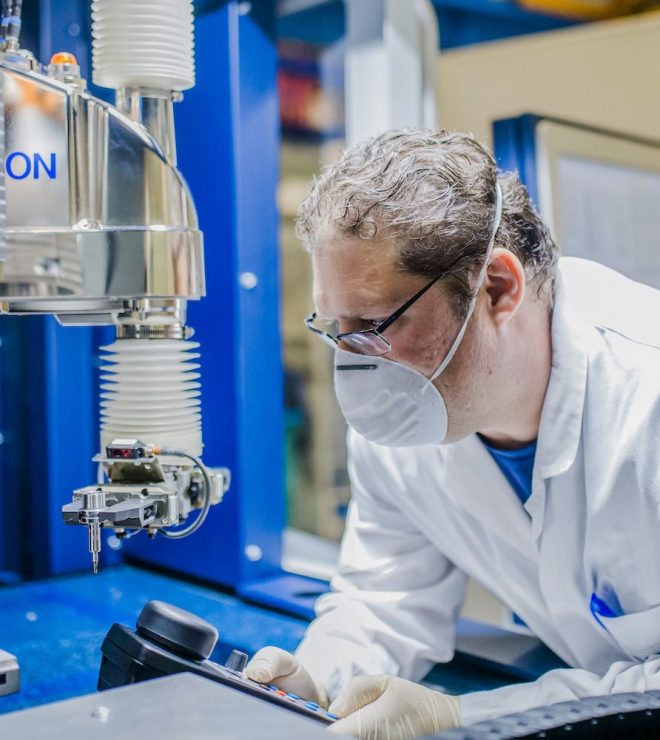 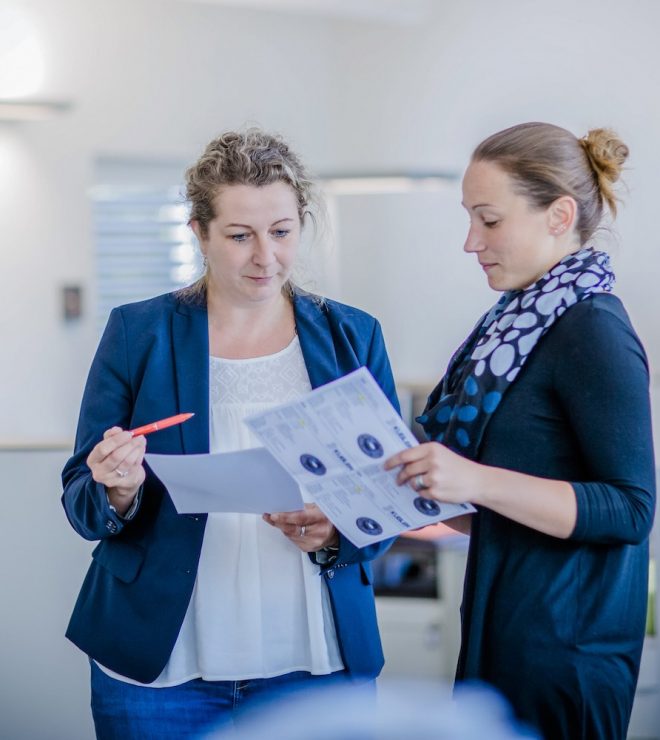 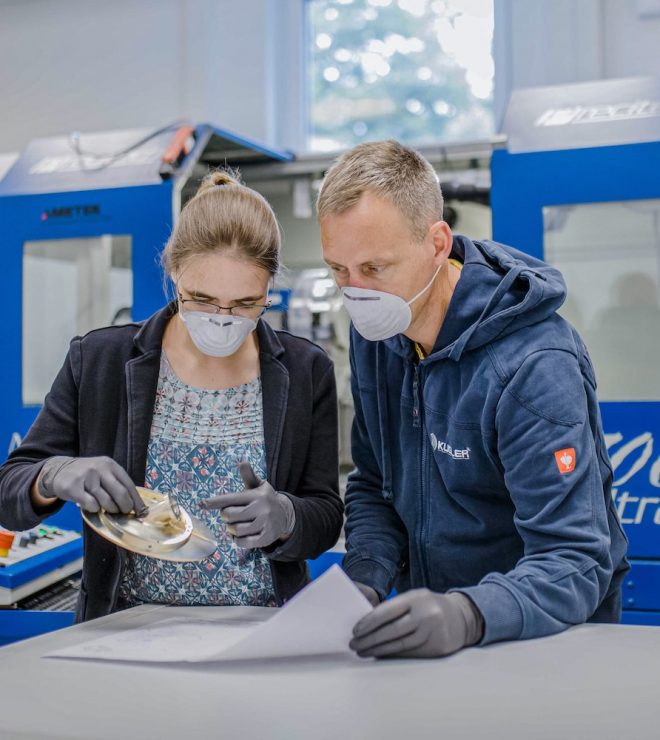 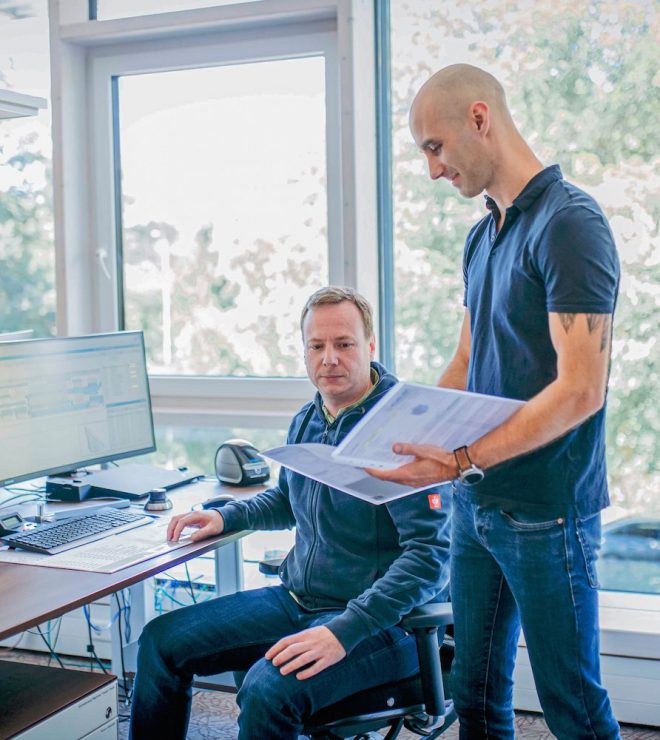 Your partner for ultra-precision technology and high-quality precision parts.

1983
Founding of the company by Lothar Kugler in Salem, Baden-Württemberg. Start of the development and manufacture of interferometers for lens and plane surface measurement as well as of air-bearing processing machines.

1986
The company is now known worldwide and builds lathes and milling machines with air bearings for manufacturing metal optics for international customers. In the meantime, the “application laboratory” for mechanical engineering has developed into an independent production area for metal optics. Delivery of resonator mirrors as well as beam guidance components for manufacturers of high-power lasers.

1990
Development, construction and delivery of air-bearing processing machines for new types of printed circuit boards, equipped with sensors and control elements for partially automated production. Start of construction work on a modern extension building in Salem. Takeover and integration of Protop-Bleile-GmbH, a specialist in polygon mirror production.

1992
Foundation of Kugler of America for on-site customer support and the production of metal optics. The development and patenting of the first real free-form mirror for beam shaping for laser hardening takes place in Salem; further work is carried out on adaptive mirrors for focus control in laser systems.

1995
The production of beam guidance components for high-performance lasers is at its peak: The lossless polarisation adjuster LIPOR wins an innovation award, a height sensor system for laser cutting systems is presented, beam guiding mirrors are equipped with flat thermal sensors for beam adjustment. In the following, these activities will be successively “scaled back”, the focus on the core business of mirror manufacturing allows the acquisition of competitors as new customers. Certification according to ISO 9001.

2003
Series production of polygon scanners for femtosecond lasers for use in ophthalmology. The basis is the HSPP model, which has been manufactured since the mid-90s. Establishment of a special clean room for the production of lens components for a generation of wafer steppers with F2 excimer lasers.

2007
Design, simulation and manufacture of components such as polygon scanners and freeform mirrors for line focusing in systems for the treatment of steel strips for the manufacture of motor and transformer sheets. Kugler established itself worldwide as a manufacturer of key components for such systems. First projects on focusing heads for multi-kW fibre lasers.

2012
Another extension of the company building: Modern open-plan offices create short distances between employees from sales, development, purchasing and work preparation. One of the world’s most precise coordinate measuring machines, in use at Kugler since 2010 is located in a new, highly air-conditioned area. Together with the expansion of conventional production with high-precision milling centres, the value chain for ultra-precision parts is kept fully in-house.

2016
The beam quality of high-power fibre lasers gets better and better; Kugler now also develops and manufactures components for single-mode laser systems. At the same time, customers are increasingly demanding standard parts made of aluminium: Scanner mirrors for 3D applications, spectrometer mirrors or gas cell mirrors – all of the highest quality and thanks to the efficient Kugler manufacturing processes at extremely economical prices.

2020
Efficient processes require efficient organisation: A new ERP system has been in use since the beginning of the year, after being tested and configured in previous years. This is accompanied by a fundamental reorganisation of the company with the focus on the customer-oriented production of ultra-precision parts, components and systems in small and large quantities. Lothar Kugler stays with the company, albeit more in the background, but the next generation will lead the family business into a successful future